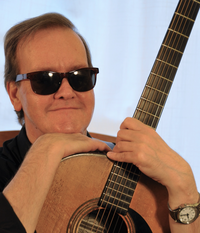 Roy Forbes is one of Canada’s best loved singer/songwriters. This Juno nominated and West Coast Music Award recipient was honoured with a street named after him in his hometown of Dawson Creek and a star on Vancouver’s Granville Street as part of the BC Entertainment Hall of Fame. Roy is firmly etched in the minds of thousands of music lovers across the country. He has made his mark for generations of listeners as a solo, band leader, ensemble member, interpreter and songwriter. Roy recently released his latest album. Edge of Blue may just be the Vancouver singer-songwriter’s best yet- a summation by an artist who has been doing this for a long time. On this album both Roy’s roots and routes are showing; the influences he’s absorbed and where he’s been. Edge of Blue is 10 songs full of wisdom, confessions, vulnerability, sensuality, self-reflection and celebration. This is art song- memorable words, compelling compositions, spare production and a voice every bit as original as when the “kid full of dreams” first came to town almost fifty years ago- pure Roy Forbes. Edge of Blue recently earned Roy a CFMA (Canadian Folk Music Award) nomination for Producer of the Year.