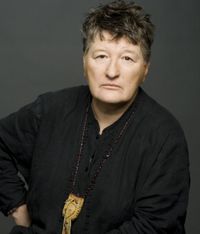 In addition to gaining fame as one of Canada’s most respected songwriters, Ferron, who is openly lesbian, became one of the earliest and most influential lyrical songwriters of the women’s music circuit.

In listening to Ferron’s music, audiences are allowed to acknowledge the passage of time, people, memories, and hopes through her poetic metaphors. Her familiar vernacular, direct statements, enlightened associations, warm and husky voice, and engaging stage presence have permitted identification with her experiences and her process, her struggles and her wisdom, her universal anguish and strength.

From the mid-eighties on, Ferron’s songwriting talents have been recognized and appreciated by music critics and audiences, with comparisons being made to the writing talents of Joni Mitchell, Van Morrison, Bob Dylan and Leonard Cohen.

In her 40-plus years as a singer-songwriter, she’s influenced everybody from Ani DiFranco to the Indigo Girls, and started her own record label in the late 1970s. She broke out in the States, too, a leader in the intersections of her various communities — songwriter/lesbian/working-class/women — who flirted with major-label success but was always, and remains, a DIY indie queen.